Introducing y’all to Kate and Javi! I’m so excited to share this interview with you because Kate was actually working in the same position as I was, Auxiliar de Conversation, when she met her husband! They are married now and live in Sanlúcar, Spain. I won’t spill any more about their story and let y’all read it for yourselves.

I unfortunately haven’t had the chance to meet the both of them, yet, but I am sure they live only a short two or three hour car ride from the town I am currently living in. I was first connected with Kate through her travel blog, and she is the one that helped me figure out Spanish bureaucracy a bit and what to do about paperwork for Mario and I. Reading their interview definitely made me chuckle a few times and I’m sure y’all will get a laugh out of it, as well!

The Quirky Pineapple: Tell me your love story! (: Where did you both meet, who made the first move, how did it come about?

KATE: Javi and I met thanks to Facebook. I know it’s not very romantic, but I think it was fate! After graduation I signed up to work as a Cultural and Language Assistant in Spain for the 2011 – 2012 school year. The day I found out I was placed in Sanlúcar de Barrameda I began searching for tour groups or event organizers in the area – to see if I could help do event promotions to earn extra money or get some free trips! Eventually, I was searching on Facebook and found a tour group in Seville; once I started chatting with the owner and told him I was moving to Sanlúcar he sent me Javi and several of his friend’s Facebook profiles (they all grew up together in Sanlúcar) and suggested I look them up once I arrived. The first weekend I moved to town I met Javi and his friends at a concert and we’ve been together ever since!

JAVI: Kate made the first move…after we met at the concert the next day we went to a local fútbol game, after that we went to the beach, and before I knew it she was planning barbecues at my house and inviting all my friends! We began traveling together and have visited 12 countries to date (she still has a long list of places we have to visit). In 2012 we did Pareja de Hecho so she could stay here and work, and after a year of working in Seville she moved back to Sanlúcar (I think she moved back because we got a puppy), but either way we recently got married…and that’s our story!

KATE: Spain is our home; I fell in love with Sanlúcar as soon as I moved here and have no plans of returning to the States. Many of our friends and Javi’s family live here too – plus my parents want to retire in Spain someday! I love Spanish culture, music, language, food, their general lifestyle…and especially celebrations like Semana Santa and Feria 😉

JAVI: We both have stable jobs in Spain (although Kate works from home for a company in London), and she doesn’t want to move back to Florida, so I guess we’re staying here!

TQP: What languages do you both speak? Which is the common language that youcommunicate in?

KATE: English is my first language and I’ve learned to speak Spanish here in Spain. Javi and I mainly communicate in Spanish…although when I get mad I yell at him in English

JAVI: It was difficult communicating with Kate at first, she couldn’t understand me when I called her on the phone and I had to explain a lot of things to her over and over again (like when she first met my family – she wasn’t accustomed to their accents), but now she has a stronger “Sanluqueñan” accent than me!

KATE: The working hours in Sanlúcar were hard to get accustomed to in the beginning; I would get off work around 3 p.m. and try to run errands…which was impossible because everyone takes a “siesta” between three and five in the afternoon. Spaniards typically start work at 8 or 9 a.m., eat lunch at 2 p.m., rest between 3 and 5 p.m. and then work until 9 p.m.  After living here for five years the schedule has grown on me; I’ll take a siesta myself sometimes and I like the fact that the stores are open late – it’s perfect for my schedule now because I work until six in the afternoon.

KATE: I love the fact that Spaniards know how to enjoy life; living here has shown me how to slow down, enjoy the simple things and to not take everything too seriously. You can’t find coffee-to-go in Sanlúcar because you’re expected to sit down and enjoy it – it’s a very different lifestyle compared to the States; always on the go, always planning my next move…sometimes you get so caught up in life you forget to stop and smell the flowers. Living in Spain (with Javi) has enriched my life so much – I’ve never been happier!

KATE: The first time Javi came to visit my family in Florida I left him alone with my father for two minutes to grab something in another room. By the time I came back my dad had begun pulling out rifles to show Javi and was trying to talk to him about things like republicans and guns…Javi’s English wasn’t very good at the time (and my dad has a very strong southern accent), so the only two words Javi understood were “republicans” and “guns”. He had no idea how to answer my dad and just kept nodding his head in agreement. The look of relief on Javi’s face when I came back into the room was priceless!

JAVI: Our plan is to remain in Spain; it’s where we met, it’s where we have our home, a lot of our family and friends are here, as well as our jobs. Kate’s parents plan to retire in Sanlúcar in the future so we don’t have any reason to live anywhere else!

TQP: Do you have any suggestions or advice for people who find themselves in aninternational, intercultural, interlanguage relationship?

KATE: You will constantly be learning new things from each other –I think this is what makes international relationships so special. Even after five years there’s still so much for us to learn about each other’s homeland, language and culture!

JAVI: It is really important to be patient with one another– for the first year or so Kate and I had trouble communicating and expressing ourselves. Communication is an essential part of any relationship – so it’s important that both of you make a conscious effort to speak slowly, explain often, and repeat as many times as it takes! 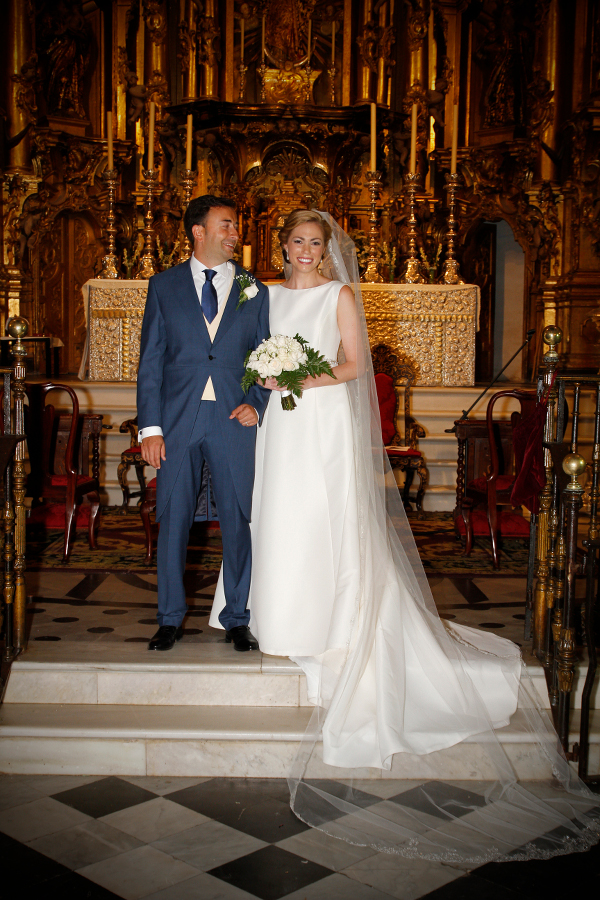 Thank you so much, Kate & Javi, for participating in the International Couples Series and sharing your love story! Stay tuned for more interviews from more couples (and some more auxiliars, like Kate and I were) who are in international, intercultural and interlanguage relationships! If you’re in an international, intercultural and interlanguage relationship and would like to be featured on The Quirky Pineapple, please contact me so we can set up an interview and you can share your love story!

If you’re interested in checking out Kate’s blog, you can find it here at KatesTravelTips.com. Her blog covers travel and lots of great information about Spain travel! You can also follow Kate on Instagram and Twitter to see behind the scenes of her life and how her days are. Thank you, again, Kate & Javi and I hope to officially meet you both, soon! (: