Travel is measured by our five senses: taste, touch, sight, hearing, and smell. Wherever we go, especially to a new area, our senses are heightened. There are new sights, tastes, and smells to experience! New Orleans is no exception to this rule. The city is a hub for sensory overload! The smells, the sounds, and of course, the people all make up the ambiance of this vibrant city. If you’ve been to New Orleans, I’m sure the first thought that crossed your mind is the on Bourbon Street – yes, that adds to the sensory overload, in albeit, an interesting way.

If you haven’t, but are planning a trip, here’s the BEST advice I have for traveling New Orleans:

Decorated with luxurious southern homes, voodoo dolls, and beautiful Spanish architecture, New Orleans is pretty easy on the eyes. New Orleans was first colonized and owned by the French, who later gave it to the Spaniards. But, Napoleon wanted it back, so he took New Orleans back from the Spaniards and deemed it French. He later sold it to the United States during the Louisiana Purchase of 1803. Because of the European influence, the architecture here is so different than any other city that I’ve visited in the United States!

In the French Quarter, especially, buildings are adorned with balconies and covered with vines and plants. Shops are set on the bottom of a building, with tenants living right above! The French Quarter is vibrant and lively, being one of the more popular tourist spots in the city. The area is always bustling, with tourists, locals, and shopkeepers and the occasional horse! Your sense of sight will be taking in pastel buildings, bold red brick apartment homes, colorful storefronts, and amazing art. If you decide to venture out of the French Quarter (which I recommend), take a stroll around the Garden District.

The Garden District is closer to the city center and is a quaint neighborhood with some massive southern homes. Some are painted in pastel colors, and others are all white with tall stoic columns. Can you imagine a beautiful southern home, large porch, and wicker rocking chairs? That is exactly what the houses in the Garden District look like. A perfect place, on a warm summer day, to sit outside and enjoy the time with your family. If you’re looking for a spookier side to the story, a few of the houses are considered to be haunted!

My advice: soak in all the colors, shapes, and textures that you see. New Orleans offers them to you with a punch and leaves you wanting to see more of these beautiful homes and European architecture. 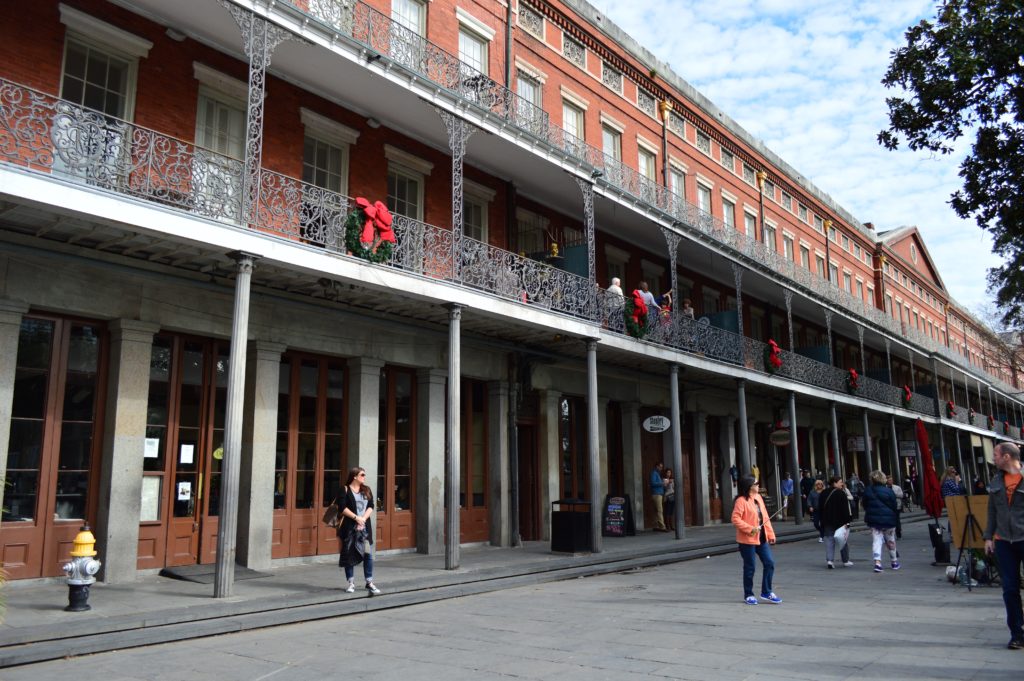 Maybe going around touching everything is a bit weird. Instead, touch the buildings, the columns, the street pillars, and think back to the colonial period. New Orleans was the largest city in Louisiana with the highest population of freed slaves after the Civil War. When you’re touching some of these buildings, even in passing, you’re touching a huge part of history. Some of the homes and hotels in the French Quarter are deemed haunted, as well. I could be a weirdo, but whenever I travel to a place rich in history, I HAVE to touch something. This could be a column or pillar, or a brick wall to a famous building/home.

My sense of touch is heightened and transports me back in time. I like to think about all the people who were there, what the building has seen or experienced! My advice: don’t go around touching things you’re not supposed to, but touch a brick wall and think about the history connected to that building.

I am sure New Orleans has its own smell. The streets are filled with the aroma of cajun cuisine, southern homestyle cooking, and touches of creole dishes. Your nostrils are ambushed with sweet smells of desserts, cheesy grits, and seafood. While we walked through the streets of the French Quarter, our group found these smells intoxicating in the best sense! Everywhere we turned, every street corner, every restaurant that had its door propped open, the smell of traditional N’awlins style cooking filled the air.

It wasn’t always amazing smells filling the streets. Bourbon Street also has a distinct smell to it. Stale beer, last night’s raucous, and deep fried food. There’s no denying that each part of the city has a special smell to it, good or bad. It brings the city to life, and allows travellers to experience the area in a different way. My advice: take in as many smells as you can, and then find a good place to sit down and indulge in happy hour.

There is no doubt that while in New Orleans, there are some important dishes to try! A few are:

If you didn’t already know, trying new food is one of my favorite activities to do while traveling. Hence why I find it so important to travel with people who are also open-minded in trying new food. While there are also an abundance of deep fried goodness, there are also flavors that are necessary to try. Give your sense of taste new spices and ingredients to try! I’m a big believer that food is an important part of any culture, and while in New Orleans, you have to try Cajun and Creole style food.

Creole cuisine is a style of cooking that originates from Louisiana. It blends together French, Spanish, West African, Amerindian, German, Italian, and Irish influences. The word creole is used to describe a person who is “native-born” in Louisiana, during the time of the French and Spanish settlers. This later encompassed African Americans and Native Americans who were born in the state. A crowd favorite creole dish is seafood gumbo.

My advice: try as much as you can, and pace yourself! The food is delicious, hearty, and flavorful. Try them all!

If there is one of our five senses that is the most heightened while traveling around New Orleans, it is our sense of hearing. New Orleans is alive! The sounds of jazz, street music, and live music will fill your ears no matter where you go. Street performers are just as equally as talented as bands. Take a moment and pause in your sight-seeing to enjoy the sounds of the clarinet, trumpet, or drums fill your ears. During dinners, we listened to acoustic renditions of “One Dance” by Drake, Frank Sinatra, and original pieces all by the same performer.

New Orleans is the birthplace of jazz, and no one plays jazz like the people of New Orleans. We took our time strolling down the busy streets and found ourselves mesmerized by the passion of performers. Crowds gathered in the middle of the streets to listen to duos, trios, and quartets perform original music that captivated the soul. Sounds a bit “spiritual”, right? But when I was standing there, listening to the passion and heart played in the music, goosebumps ran up and down my arm. If you’re heading out on the town, head to Frenchmen Street in the French Quarter. It is New Orleans’s live music and entertainment district. It doesn’t matter which bar you step into, the music will carry you there.

My advice: FOLLOW THE MUSIC! If there’s nothing else you do, the music of New Orleans will guide you to the best places and the spookiest. The city has a pulse that wraps you and intrigues you, and the music is the sweet melody that guides you to your next adventure.

Have you been to New Orleans? What was your favorite part of the city? What is your BEST advice to see this colorful area?

Enjoyed this post? You might like these, too:
Exploring the City of Love: Philadelphia, Pennsylvania
How Travel Teaches Us That Love Trumps Hate
Traveling Is A Privilege, And I Am Privileged
Exploring Córdoba, Spain: City Guide

Join the Pineapplers family and receive tips, advice, and adventure straight to your inbox once a month! (:

16 thoughts on “The BEST Advice for Traveling New Orleans”