How Much Money to Save Before Moving Abroad: Auxiliares de Conversación

are you thinking of MoVING ABROAD or travelling for at least a year? then I have you covered! in this post, i share my insights and trips to save money for travelling.

The big question everyone asked me when I moved abroad was:

“Are you crazy? Do you even speak Spanish?”

Just kidding. That came at a close second. The biggest question I was asked was:

“How are you going to survive over there if you only get paid 700€ a month?”

Well, if we think about the country that I come from, one thing is very obvious: The United States is relatively expensive. Our salaries are higher than some countries to cover the cost of living in different areas. For example, Northern Virginia is a pretty expensive area. If we were to go a bit further down south, some areas are not as expensive. The same goes with any other country you decide to live in, especially in Spain. So, how much money do you need to save before moving abroad? And how much money do you need to survive in Spain?

I’m sure going into it, we are all aware that moving is expensive. Moving anywhere, even down the road or into your first real home is expensive. In all the excitement and emotions of moving abroad, we tend to forget just how expensive it is. There are flight costs, buying all the home essentials, paying rent, security deposits, utilities, transportation fees, and more! Not to mention, what about all those cañas and tapas you’ll be getting with your new expat friends?

Before I moved abroad, I was fresh out of college. Whatever money I had, was from my parents, my graduation party, and a few random jobs I had while in school. It wasn’t much, and after my graduation party, it definitely helped, but I knew I needed more. When it comes to money, a lot of people are very touchy about the subject, including myself. Talking about money, how much I have or how much I don’t have, makes me anxious. I have a big fear of not having enough to pay for everything I need, and any emergencies. So saving up to move abroad gave me extra pressure to have enough cushion in my account.

The summer before officially flying over to Spain, I worked as a Cheese Bartender. The job paid a decent amount and I also received tips from my bar. From working as a Cheese Bartender, having graduation money, leftover savings from college, and helping out here and there with babysitting, I hustled. Below is a little snapshot of how much I saved, my total before leaving, and what my little income looked like:

If you talk to my family, they will say I am probably one of the more “frugal” members. Or, I’m just cheap. But, when you’re trying to save money to go abroad, sometimes being cheap (or frugal) is necessary! I learned that if I wanted to make this type of lifestyle a reality, some things needed to change in regards to my expenses. I went out a lot less, lived at home to save money, worked a lot of double shifts at the restaurant to save money, and didn’t eat out as much or splurge on crazy items. Whatever money I spent before Spain was either on things I thought I would need (ie: clothes, shoes, etc) or very small splurges (ie: that tattoo hehe). Before even getting to Spain, Auxiliars will need to go and get their student visa beforehand. Below is a price breakdown of what I needed to pay for to be eligible to receive my student visa and get to Spain:

*some of these prices are estimated, because I can’t remember how much I paid at the time!

In reality, after paying for all of those things, I probably had a total of $4000~ left in my bank account. My parents were very generous, to help me pay for a few things before leaving. They helped me pay for the flight to Spain, a hotel when I first arrived, and meals for the first 10 days. Although I wanted to fly over alone, my dad was VERY KIND and offered to go to Spain with me. He helped me get settled, made sure I was ok, and made sure I had an apartment.

Who can blame him? His first child was leaving the comfort of home and the United States! I decided to live in Spain, after only visiting the country briefly in high school. I decided to move to a country where no one else in my family had even visited, without any Spanish, and barely knew anything about the culture. I’m sure my parents questioned my sanity.

Wanna create an online business to help you with your moving expenses? In this ebook, I’ll show you how. Download your free copy here!

Expenses of Setting Up a Home Abroad

Setting up a new home is expensive. Living on my own, without my parents helping, was difficult. While living off-campus at my university was one thing, living in Spain on my own was an entirely different thing. I needed to figure out the cost of living in a foreign country, and the exchange rate of it all. In the Auxiliar de Conversación program, it is recommended that auxiliars save up enough cushion before arriving. As an auxiliar, I was only paid 700€ a month, at the end of the month. The program is also notorious for not paying their auxiliars on time. During my first year, I didn’t receive payment until the beginning of December! By then, I had already been working two full months with my schools. My second year with the program was much smoother. I received payment on time and had no problems.

*Pro tip: within the program, it can depend on who is the person that signs off on your checks. For my first year, the government of Castilla La Mancha was in charge of depositing my stipend. This caused for the late payments in the beginning. My second year in Andalucía, my high school was in charge of paying me. I only received one late payment because the professor hadn’t made it to the bank that weekend.

If you’re worried about how much it can cost to set up life in Spain, here’s a little breakdown of my expenses. 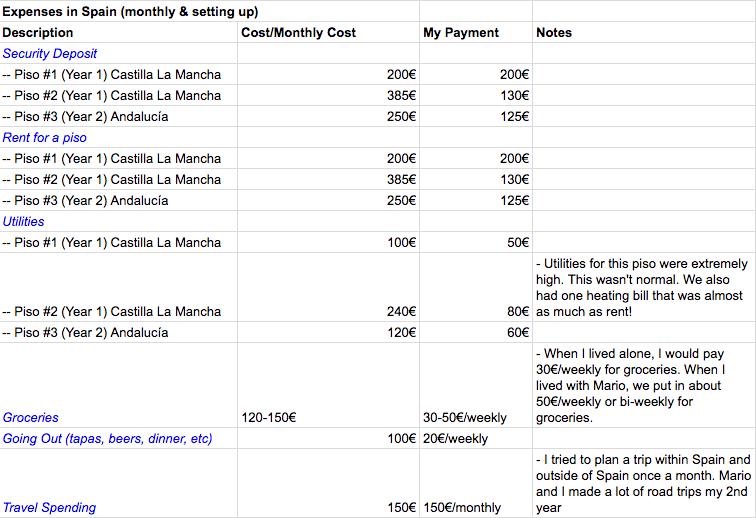 I was also very “frugal” in Spain, without skimping out on opportunities and other things. My main priority and goal was to travel as much as possible and live a typical Spanish lifestyle. While I took part in normal outings, such as tapas, cañas with friends, and going out, there were still times I opted out on a lot of things. I wanted to save as much as possible to travel as much as possible. This also meant that I took on a lot more private English lessons than the average auxiliar because I wanted to save. This is snapshot of what my income looked like while living abroad. I also picked up some freelancing opportunities here and there, which helped pay bills in the United States! 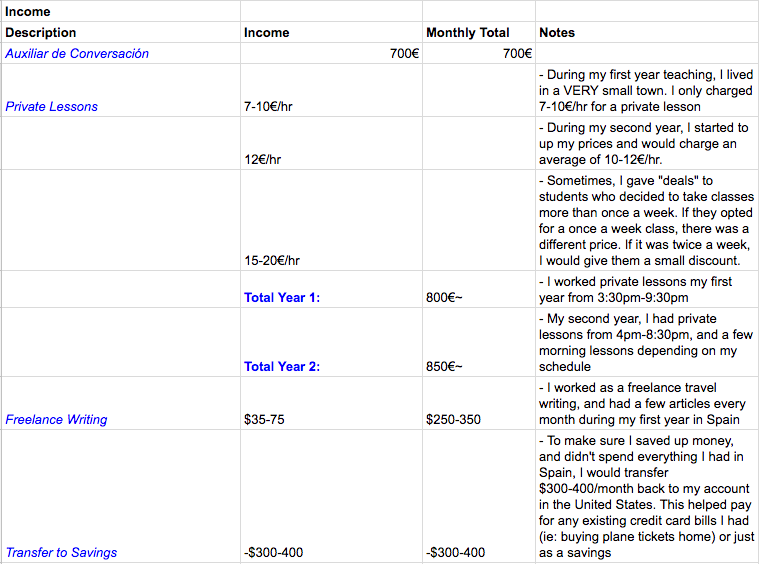 While I tried to save as much money as I could, living in Europe didn’t allow me to save much. There are a lot of other programs in other parts of the world that allow expats to save a bit more money. For example, living in Southeast Asia is a lot cheaper than living in the United States AND in Europe. I have heard that programs over there also pay their English teachers a bit more, which makes it easier to save money. While living in Spain is a lot cheaper than living in the United States, it all became very relative. Although my stipend could be considered chump change back at home, it was considered to be a very good salary in Spain. Going out may be cheaper (hello, 1€ beers?!), but in the end, it ended up being the same.

At the end of my two years, before I moved home, I was able to bring back 1300-1400€. This was around the same amount that I had transferred to Spain when I had arrived my first year. The extra money I had was kept in a savings account in the United States, for emergencies. It was also great to have a little money in the bank when returning home. In the end, I didn’t spend more than I intended nor did I save too much more. I returned home with the same amount of money as I had started!

If you’re serious about the digital-nomad lifestyle (or you just want to join the location-independent workers club), check out our Global Online Business Starter-Pack!

If you’re worried about money, and it is something that makes you anxious (like me), I would recommend saving up a good cushion. Having $5000 saved up before going to Spain is more than enough, but I think having at least $3000 saved up should be plenty. If your parents are generous enough to help you, this will help cut some of the costs, like a plane ticket. If you’re going about this solo, $5000 should give you enough to transfer a fair amount to Spain, buy your plane ticket, and help you get set up.

My pro tip is to transfer a little bit of your income in Spain back to your account in the United States each month. This helps you keep track of your savings, gives you some money if you decide to come home and start job hunting, and is like an extra savings account for you! Having 700€ a month in Spain is more than enough for you to live comfortably. Of course, in different areas of the country, prices may fluctuate. But, if you can supplement your income with a few extra revenue streams, you will be set! Just don’t blow your hard earned cash (or coins) on those 1€ cañas, no matter how tempting!

Join the Pineapplers family and receive updates, tips, and adventure straight to your inbox once a month!

30 thoughts on “How Much Money to Save Before Moving Abroad: Auxiliares de Conversación”